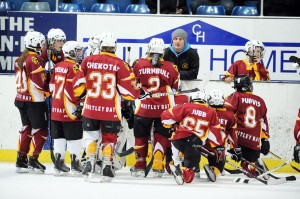 After their terrific win in their last game against Nottingham, the Tomahawks made their first road trip of the season for an even tougher test against Telford. Telford had played 3 games already this season, winning 2, against Northern Stars and Solihull and getting a draw at Bradford.

The game started with chances at both ends, firstly Whitleys Ben Richards having a shot saved by Telford netminder  James Owen-Jones, and then Whitleys netminder Mark Turnbull pulling off a great stop from close range. Callum Read was next to test Owen-Jones, shooting through traffic from the point, but the keeper did well to turn it aside. However, Whitleys pressure finally paid off at 8.16 mins, when Harry Harley walked out from behind the Telford net to fire a narrow-angled shot under the home netminder. The Tomahawks doubled their advantage two minutes later, when Jack Davies got on the end of a pass at the back post to force the puck home. It was all Whitley at this stage, and they almost scored a third right at the end of the period, Richards hitting the post as the buzzer sounded.

The second period was only 2 minutes old when Whitley did add a third goal, Dale Sharp on the breakaway racing down the right and firing a cross shot into the top left corner past the helpless goalie. Telford finally got on the score sheet through Ollie Hunt at 23.26 mins, firing high into the net to make the score 3-1. Whitley were on the penalty-kill shortly after the Telford goal (Harry Harley x-check), but actually increased their lead when Richards netted a short-handed goal at 28.20 mins. The period ended with the visitors leading 4-1.

Whitley ran into penalty trouble at the start of the 3rd period when Richards was given a Delay of Game penalty, and they were punished for it when Jack Spotwood fired in the home sides second goal on the power-play. However, no sooner was Richards out of the penalty box, when he was adding a power-play goal of his own to once again put The Tomahawks 3 goals clear. Still, Telford wouldn`t lie down and just 10 seconds later Hunt scored his second of the game to once again reduce the arrears to just 2 goals. The game was marred by an ugly incident at 35.55 mins when Jack Davies was floored by a check to the head from Josh Holden, and as the home player was being lead off the ice to the penalty box, the red mist descended on Davies, and he retaliated against the Telford player, for which he was thrown out of the game. If this wasn`t bad enough, he was given a 5 minute penalty against Tefords 2 + 10. Telford took advantage of their 3 minute power play to score their 4th goal of the game through Nick Oliver at 38.35 mins, but some heroic defending from Whitley saw them see out the rest of the period and deservedly come away with the 5-4 win to keep up the only 100% record in the division.