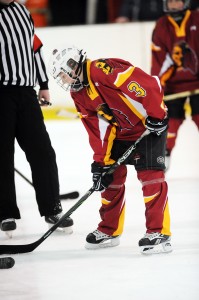 Solihull made the long journey north, having lost their first 4 games of the season, conceding 95 goals in the process and remarkably still waiting for their first goal. The Tomahawks on the other hand, have had a 100% winning start to their season, so surely there could only be one outcome to this match, an emphatic home win.

As expected, the home side came out all guns blazing, with visiting netminder Joshua Crane the busiest player on the ice. However, the deadlock was broken at 2.43mins when Dale Sharp scored on the doorstep after good work by Harry Harley and Billy Nicholson. With everyone now expecting the floodgates to open, the visitors to their credit, stuck to their game and continued to frustrate the Tomahawks for much of the remainder of the first period, and they could only add 2 more goals through Harley and Ben Richards. Home netminder Mark Turnbull only had 3 shots to save in the whole period.

The second period started much the same as the first, with the Tomahawks bombarding Cranes goal, and they scored their fourth of the game through Kyle Ross 80 seconds into the period, after he was left unmarked in front of goal. Solihull were having no luck in trying to break through the Tomahawks defence, and were reduced to shots from long range which didn`t bother Turnbull at all.

The rest of the second period was one way traffic, with the home side adding a further 6 goals through Harley (4), Richards and defenceman Dean Kerr, scoring his first ever goal for the club with a rocket from the blue line.

With the game appearing to be safe, the Tomahawks decided to give back-up netminder Ben Gill a run out for the third period. The period was only 70 seconds old  when the Tomahawks went further in front, Callum Read feeding Richards with a pass, and when Crane saved Richards shot, Read was on the spot to force the puck over the line for his first goal of the season. The home side continued to throw everything at Solihull, but a combination of bad finishing and resolute defending, kept the score respectable for the visitors. Harley scored a bizarre goal at 38.26mins, his sixth of the game, after firstly breaking Cranes stick with a slapshot from the blue line, the puck somehow found its way back to him and he fired another slapshot past the stunned stick less keeper. Two more goals were added by Callum Queenan and Natasha Crozier in the dying seconds to make the final score 14-0 to the Tomahawks and maintain their 100% winning record.